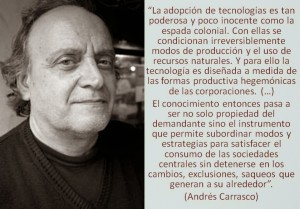 In tribute to Andrés Carrasco

For several months a strong campaign has been waged to promote a group of new biotechnologies (such as gene editing, synthetic biology, the use of micro-RNA, manipulation of gene expression through intervention in complex processes involving epigenetics, to name a few examples), presenting them as ”successors” to GMOs.

Two decades ago, the promoters of GMOs presented a long menu of promises that were never fulfilled. Today, the same sectors are telling us that these new successor  biotechnologies are even more accurate, safe and efficient; that with minimal genetic intervention you can achieve extraordinary results: cures for various diseases, increases in agricultural production, elimination of pesticide use and new renewable fuels to help address climate change.

Contrary to proponents’ claims, the introduction of GM seeds actually strengthened corporate power over the food system and caused a rapid expansion of monocultures of soybeans, corn, cotton and canola (which were the only biotechnological crops which were a commercial success). GM crops not only displaced food crops, but also accentuated the impacts of the Green Revolution. New “superweeds”, “superpests” and diseases emerged, leading to increases in pesticide use. Monopolistic power over seeds was intensified through the imposition of intellectual property rights and other legal mechanisms. Land grabbing increased. Agriculture was ultra-technified and the countryside depopulated in the cause of establishing an agriculture without farmers.

The application to rural areas of the new biotechnologies mentioned above will only accentuate these trends. Other, unanticipated impacts are also possible, since the new technologies facilitate faster, more extensive changes in the genetic material of more organisms, and at lower cost. In addition, some of these new technologies, such as gene editing by the CRISPR / Cas9 system, are acessible to thousands of individuals.

We question the safety of these technologies, which indulge in advanced kinds of genetic manipulation in the face of huge ignorance about the possible effects at the level of cells, organisms, human health and the environment.

We are not asking for the  application of biosafety standards to these new technologies, nor the development of stricter risk assessment. We are demanding, rather, the suspension of all experimentation in this field. We question the exaggerated influence of “science” in the decision-making process regarding the adoption of these technologies, because we know that the same power relations that exist in society hold in scientific
research, and that the main lines of research are decided by those who sponsor and finance the investigations.

It’s time that farmers and society as a whole reclaimscientific research so that it becomes more firmly based on agroecological techniques and local knowledges, in order to reverse the growing trend toward depeasantization and to ensure that emerging health issues are treated holistically, addressing the social and environmental roots of disease.

It is inconceivable that the social, environmental and health problems that have been generated by the unchecked expansion of a system based on a techno-scientific market model, whose main motivation is to maximize economic profit, can be solved or alleviated by adding the new chimeras of the biotechnology revolution.